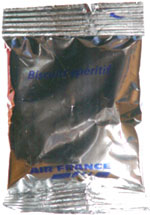 Taste test: I wasn't sure what to expect before opening this, and it turned out to be quite an unusual snack.

The best description I can give is that these are small crackers made out of roughly the same material as pretzels. Each is about a half inch by a half inch, and an eighth of an inch thick. The shapes resemble various kinds of bread, such as a slice of bread, a spiral sticky bun and a roll. Biting into them was disappointing: They tasted kind of like pretzels, but they were not crisp, and they quickly become chewy. There was a slight sesame taste. The bag also included five very small raisins, which were sweet and good.

This snack was discovered by Amitai aboard Air France. Review published January 2004.