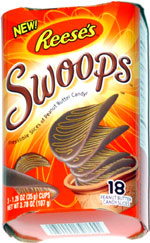 Taste test: The concept here is that these are supposed to taste like Reese's but have the shape of Pringles. Definitely an odd concept. (Swoops are also available in Hershey's Chocolate, York Peppermint, White Chocolate Reese's and Milk Chocolate Toffee & Almonds versions.)

This container includes three individually sealed 6-packs of Swoops. Upon opening one of the 6-packs, I found that the Swoops are indeed shaped like Pringles, but slightly smaller. The top of the Swoop is chocolate brown in color, except for a peanut butter squiggle across the middle, resembling the pattern on Charlie Brown's shirt. (The actual pattern on the chips is quite a bit different from what was pictured on the package, which showed more squiggles, each of which was far narrower, taller and swoopier than the real ones on the Swoops.) On the bottom of the Swoops, there's no squiggle, but the whole brown bottom surface is textured with a pattern of diamonds, like something you'd see on a sweater. The packaging notwithstanding, the candies themselves look very classy, like something you would see overpriced at a fine chocolate store, rather than the candy aisle of the supermarket at 18 for $1.50. The packaging is functional, though, as none of the Swoops were broken or stuck together. There was a slight whitening of the chocolate in the area where one Swoop touched the next.

From the package: “Irresistible slices of peanut butter candy” ... “Reese's® Swoops™ are the essence of your favorite chocolate candy. The unique shape envelops your mouth in chocolate bliss. The moment to experience Swoops™ ... anytime, anywhere!”

This snack was discovered by Jeremy at Target. Review published January 2004.