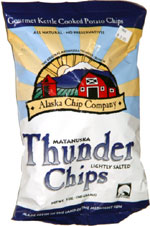 Considering that they're labeled "lightly salted," I was quite surprised by how flavorful the chips were. The salt level was not consistent from chip to chip, and some of the chips actually tasted like they had more salt than your average chip. This would, of course, make them heavily salted lightly salted chips. They're good chips, but they not nearly as good as Cape Cod chips, which remain the standard-bearers of kettle-cooked chips.

From the package: “People in the Matanuska Valley have long known the secret of Alaskan potatoes. Potatoes so full of crunch that aren't grown, they're mined. Potato miners don't seek the spotlight, you won't see them in many headlines, they are searching for a potato so elusive, so robust, that many said it was just a story told by sourdoughs. Some laughed at the potato miners, mocking their epic quest for a spud known only as 'Thunder Crunch.' For others, just hearing the words 'Thunder Crunch' fills their hearts with fear. They blame the many earthquakes, aurora borealis and other phenomena in the Northland on these hearty vegetables. Some even said searching for the legendary spud should be banned due to the many dangers involved. In the spring of '03, legend became reality when deep below the Matanuska Valley a rumble was heard that would forever change the way we think of chips. Thunder Crunch was discovered by the miners, and those unsung heroes have brought them to the surface to be enjoyed by everyone.”

This snack was discovered by Sam (Nancy's friend) in Alaska. Review published December 2003.