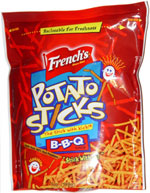 In Canada, potato sticks usually have a hickory or bacon flavoring, but it's unusual to see potato sticks in the United States have any special flavor at all. I generally like them plain, but French's has done quite a good job with these. They're quite tasty. I haven't decided whether I like the bag these came in better than the cans that potato sticks generally come it.

From the package: “Stick With Us!” ... “Fun Facts: If you were to line up all French's potato sticks consumed in one year, they would wrap around the worlds 6 times. The potato is 80% water. The average American eats about 143 pounds of potatoes a yeat!”