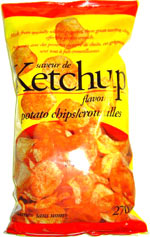 Taste test: These are good, mild but somewhat tangy ketchup chips with a pale yellow color to the chip and a dark maroon-colored seasoning.

The level of flavoring on any given chip seems to be proportional to the amount of seasoning, so grab a darker one if you're looking for more ketchup taste. The weird thing about these was that after one of our tasters suggested that these taste like apple crisp, several of our tasters agreed. So there's something odd about the flavor that makes some people taste ketchup, and others taste apple. But most people liked them.

From the package: “Made from specially selected potatoes, these great-tasting chips offer the perfect crunch.”

This snack was discovered by Keith and Melissa in Niagara Falls, Canada. Review published . 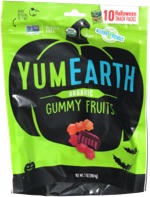