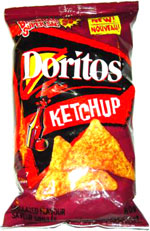 Taste test: As a fan of ketchup-flavored chips, I was thrilled to see that Doritos was offering a ketchup flavor. The color of the chips was a lot like the Nacho Cheesier flavor, but maybe a bit more red, rather than orange.

The taste was definitely a change from your usual Doritos, and it was a very good, tangy ketchup flavor. But I think that a good ketchup potato chip tastes better — potato and ketchup just go together better than a corn and ketchup. Still, a very good chip, and a worthy effort at making a new Doritos flavor.

Smell test: Smells mostly like spicy, vinegary ketchup, with just a bit of corn chip smell in there too.

This snack was discovered by Keith and Melissa in Niagara Falls, Canada. Review published October 2003.