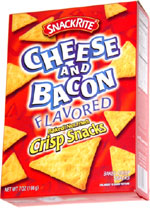 Taste test: The real question with these was "What are they?" They've got a tringular shape and size similar to Doritos.

But they're really nothing like Doritos. They're not crackers. They're not chips. hey've got a whole bunch of very loose cheese powder on them. The're kind of crunchy but not particularly crisp. They taste kind of like Cheez-Its, but not as good. There's barely any bacon taste. Not bad, but nothing special.

This snack was discovered by Jeremy at Aldi Foods. Review published .