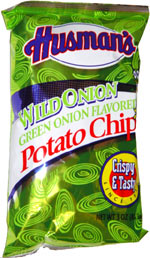 Taste test: These are good potato chips with a toasted and slightly sweet onion flavoring.

The chips are indeed very crisp, just as it says on the bag. They've got some tiny green specks on them, but I think that's just parsley put there to make them look more green oniony. There is variety of crunch levels among the chips in the bag — some have a soft crunch, and others have a more impressive crunch when you bite it. It seems as if the chips in the bag aren't all of the same thickness, so different chips crunch in different ways.

From the package: “Wildy Willy Onion says, 'If you luuuuvvvv the taste of onion, then you have to try Husman's new Wild Onion flavored potato chips.' Don't tell anyone, but actually 'Wild Onion' is not a totally new flavor for Husman's. Longtime Husman customers will remember the savory taste of Husman's Green Onion flavored potato chips from years gone by. Loyal Husman customers continue to ask Husman's to bring back the savory taste of Green Onion potato chips. So now with the help of Wild Willy Onion, Husman's has taken an old favorite and made it a little Wild. Husman's has combined the taste of crispy, tasty Husman potato chips with savory wild onion seasoning to make one great snack. So if you want to munch on a chip that is totally cool and totally wild, then you have to try Husman's 'Wild Onion' Flavored potato chips.”