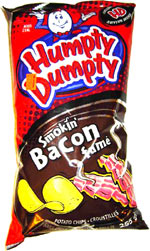 Taste test: These are probably the same chips listed here on the site as "Humpty Dumpty Smokey Bacon Potato Chips," but the good folks at H.D. 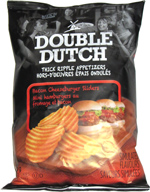 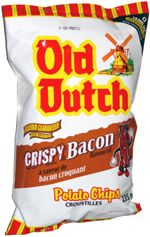 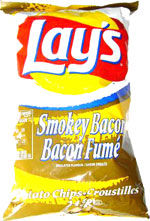 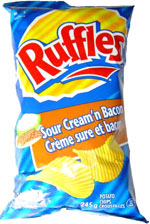 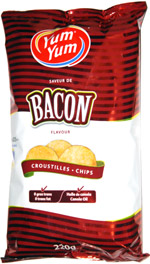 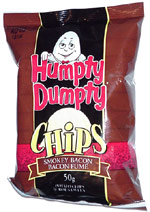 have renamed the chips (by changing smokey to smokin'), as well as re-designing the chip bag itself. These chips are really good, they have a strong smokey bacon taste, not a lot of powder that sticks to your hand, and will definitely remind you of eating bacon. It's tough to eat a whole bag of these, however, in one sitting, because after a while the bacon flavor (or flavour if you're from Canada) gets to be too much.

Smell test: A slight bacon aroma. At first I thought of a pancake breakfast when smelling these, it was probably the bacon doing that.

From the package: “At Humpty Dumpty, we make flavour an explosive experience by using only the highest quality potatoes and the most intensely flavoured seasonings for the best-tasting potato chips around. Dig in and experience them yourself... we know you'll agree that Humpty Dumpty chips explode with mouth-watering flavour!”

This snack was discovered by Keith and Melissa in Niagara Falls, Canada. Review published .