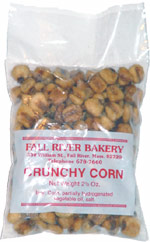 Taste test: This is similar to the mass-produced and nationally distributed Corn Nuts, except that these are made by a smaller local bakery.

They're basically toasted corn kernels. They're very crunchy, but not quite hard enough to break any teeth, and they've got a nice toasted corn taste.