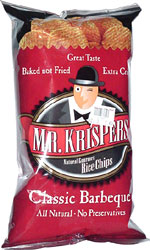 Taste test: When I opened the bag, this seemed to be a promising concept: Snacks made from rice, but shaped sort of like rippled potato chips, and yet strong enough that the chips were unbroken.

But once people started eating them, the promise was not fulfilled. The barbecue taste was kind of weird, and the texture and taste of the chips was nothing great. Rice has its place in the culinary world — as one of the essential components of Chinese food — but when it comes to snacks, it usually don't work. Most rice cakes are just about flavorless (and that includes the "flavored" ones) and apparently flavoring potato chip-shaped rice thingies doesn't really work either.

Smell test: Sort of a barbecue powder-type smell, better on the second whiff than the first.

From the package: “Mr. Krispers likes to remind everyone that it's 'Krispers with a K' which is unusual as far as spelling goes but somehow befitting the uncommonly good taste of his Natural Gourmet Rice Chips. His mantra has always been 'rice is nice but taste is the true delight.' To that end, his baked rice chips are flavorful while still being low in fat and cholesterol free. Light and crispy with an extra crunchy quality, they charm one's taste while stilling being all natural, healthy and better for you.”

This snack was discovered by Jeremy at Christmas Tree Shops. Review published August 2003.