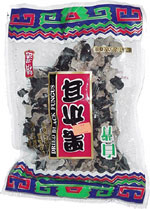 Taste test: I thought this was a snack, based on the colorful bag it came in.

After trying it, not so sure, and we've since gotten a couple of emails telling us that it's supposed to be used for cooking. Uncooked, it was very hard to eat, because it had a consistency similar to uncooked pasta, so you could try to bite in but never really get very far. Only one of our tasters was adventurous enough to keep chewing and swallow it. He said it didn't really taste like much of anything.

Smell test: Kind of sweet and not too bad at first, but bad on subsequent whiffs.

From the package: “Serving Size 100g”