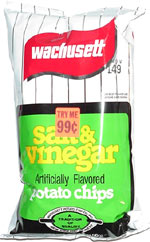 Taste test: Nice, and not too strong.

They won't make your face pucker after you eat one. If you don't like salt & vinegar chips, you might be able to handle these (One of our tasters has a bias against salt & vinegar chips, and he thought these were OK. Tip: Don't put your tongue directly on the chip first. Crunch them with your teeth and you won't taste as much vinegar. Sadly, two of our testers ignored this advice and quickly puckered their faces.)

From the package: “Since 1939 the Wachusett Potato Chip Co. has been a family-owned business. Drawing its name, WA-CHU-SETT, from two well known central Massachusetts landmarks near our corporate facility; our name is now recognized throughout New England.”

Trivia: Small bag was only 29 cents!

This snack was discovered by Jeremy at Brown's Corner Store, Maynard, Massachusetts.