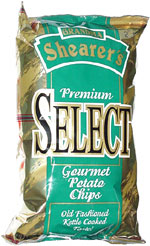 Taste test: When I saw the words "kettle cooked" on the bag, I figured these were going to be in the same genre as Cape Cod potato chips.

These chips have a lot going for them: they taste very potatoey, they have a nice crunch, and the bag includes many large chips. But I was mistaken in expecting Cape Cod-like chips. The texture and taste are much different, just not the same sort of crunch or taste, and not as curly, probably because these are cooked in soybean oil. They're sort of like some of the lard-based chips, except not quite so greasy-tasting. Some people liked them a lot, and they're definitely good chips, but overall the Cape Cod chips have a major edge on these.

From the package: “Old Fashioned Kettle Cooked Taste!” ... “Potato Propoganda & Other Odd Tales. It's a Wonderful Game. Once again, I had blown an excellent round of golf onmy old nemesis — hole 17 — a downright nasty par 5. I had finally had enough torture and I was about to cash it in. There I stood, teetering on the edge above the deep, deadly blue water hazard, my extremely expensive clubs perched above my head, ready to sink to the same depths that had taken from me many of my most cherished golf balls. All of a sudden I heard a cry for help. A little man stood by the water dressed in an ancient tweed suit. He begged me to retrieve his favorite club from the water. 'Thank ya lad,' he said in a thick Scottish accent, 'I'm Angus MacGilvrey, and I must repay you. How about a round of golf?' I wasn't in a mood for any more torture, but something about him was irresistible. As we teed off, I expected him to dish out divots with his old golf clubs, but he promptly whacked the daylights out of the ball. My jaw hung ajar ...”

This snack was contributed to Taquitos.net by the manufacturer. Review published May 2003.