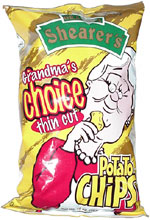 They're not too salty and have a nice potato taste, without being greasy. "They're kind of like Wise chips, only better," said one taster.

From the package: “Dear Grandma Shearer: You might think I'm a bit nutty, but I've been cultivating an idea. I'm a farmer and I just love to grow things — especially those golden, delicious apples. But my wife, she's got a bee in her bonnet that we need to be growin' potatoes. She took one bite of your Grandma's Choice Thin Cut Potato Chips and the next thing you know she's out pricing spud pickers, and askin' for seed money for our new enterprise! Of course now farming has become a bushel more competitive than it used to be, not to mention my wife's sort of grown on me these last fifty years. I'd like to keep things peachy between us. After all, we've been raisin' cane since we were saplings. She suggested I write and offer our services as your potato supplier, but I had a thought of my own sprout up. Your chips are delicious and my apples are golden, so how about some golden potapple chips?? We could raise quite a ruckus round these parts with such a fertile idea? Sincerely yours, Pete Moss”