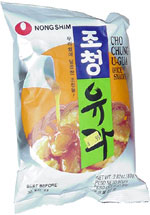 Taste test: These were good.

Before opening the bag, I had no idea what to expect. After opening the bag and taking a look, I still had no idea what to expect. The first one at the top of the bag looked sort of like half an onion ring, but most of the other ones weren't so curvy. Upon taking a bite, I discovered that these are thick and fairly crunchy sticks made from processed rice, with a sweet coating and a very sparse coating of sesames. Based on the picture on the front of the bag, I'm guessing that they're supposed to taste like a sweet pancake syrup, which they sort of do. It's a nice taste. Once you've eaten one, you do keep returning to the bag for more.

Smell test: Kind of a weird sort of fried food smell. Not that good at first, but not too bad on the second and third whiff.

This snack was discovered by Jeremy at Mirim. Review published April 2003.