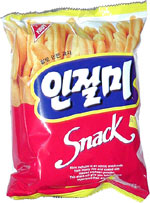 Taste test: This snack was a surprise hit around the chip bowl.

The bag looks like an oversized container of McDonald's freedom fries. (It's a foil chip bag, not a fries container, but the art on the bag does give it a definite resemblance.) The snacks themselves are shaped like widened fries with a groove down the middle. The taste is hard to describe, with an unexpected sweetness to it, and an interior taste found in some other rice-based snacks. Not quite addictive, but once you do eat one, you'll likely come back later for another.

Smell test: Kind of like a baked potato, but not really (and it's actually made from rice).

From the package: “Kirin Inchulmi is an ethnic snack made from mostly rice and coated with roasted soybean powder. This snack will give you totally unique experience than any other.” ... “Member of Snack Food Association”

This snack was discovered by Jeremy at Mirim. Review published .