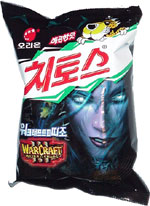 Taste test: These are the Korean version of Cheetos.

The bag bears little resemblance to an American Cheetos bag, as it's mostly black, but Chester Cheetah's smiling face does appear near the top. The Cheetos themselves are shaped a lot like the regular Crunchy Cheetos, but they look quite a bit different, with a very pale shade of orange, rather than the usual fluorescent orange. They have a nice, tangy and slightly spicy taste, and the taste grows stronger if you eat a couple of them in a row. It's a whole different taste from any other Cheetos — in fact, it's not a cheese taste at all. The level of crunchiness is OK but a bit lower than I've come to expect from Cheetos. Pretty good, though.

Smell test: Not a bag smell, but they definitely don't smell like Cheetos.

This snack was discovered by Jeremy at Mirim. Review published April 2003.