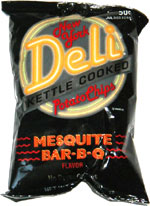 bag was mostly air, after I opened the bag it looked like it was half empty before I even grabbed the first chip. Ugh. The chips themselves had a lot of barbecue powder on them, but not much on the barbecue taste side of things. The kettle-style makes the chips crunchy, but I'd probably go with another variety if I was a true barbecue chip gourmet.

Smell test: A slight barbecue aroma from the bag.

From the package: “Your order's up! There's nothing better than noshing at a real New York Deli, and our chips are definitely no exception! Extra crispy and crunchy, these kettle cooked chips have that hearty flavor you'd expect from your favorite deli. You could almost say they were made to order!”

Trivia: Claims to be "the best of New York in a bag."

This snack was discovered by Keith at Belly Delly Deli, on Broadway between 49th and 50th, Manhattan. Review published .