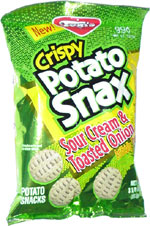 Taste test: These are hollow, roughly hexagonal-shaped snacks with gridlines of holes on them.

They seem to be sort of a knockoff of Ruffles 3D's, which like these are made from potato starch and molded into shape. The sour cream and onion taste is OK, but it's nothing special. After taking a whiff of the bag, I was expecting the taste to be really good. The taste is better when you eat two of them in fairly rapid succession than when you eat just one.

From the package: “Got the munchies? Looking for a snack with great bit taste? Try Tom's bitw-sized Crispy Potato Snax. Tom's Potato Snax have an irresistible potato flavor and a light crispy crunch. Do you know why they taste so good? Because they're made by Tom's and they're loaded with zesty sour cream & toasted onion seasoning. So go ahead ... chomp on some.”

This snack was discovered by Keith and Melissa in Orlando, Florida. Review published .