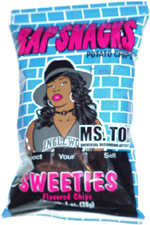 Taste test: These are good sweet barbecue chips, with a definite emphasis on sweet.

They're thin and crisp, with lots of flavor powder. There's no heat to these chips that I could discern, and also no aftertaste.

From the package: “Classy, sassy, fierce and aggressive are all characterstics that describe Ms. Toi. You've previously seen her on the Dr. Dre 'Up in Smoke' tour and heard her on Ice Cube's 'You Can Do It,' now it's her time to shine in her debut album That Girl. A woman of unparalled talent and persistence, Ms. Toi wrote everything in her impressive fifteen track release.”