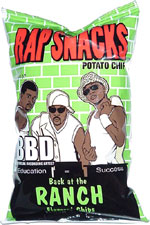 Rap Snacks BBD Back at the Ranch Flavored Chips

They're good and quite tasty, but they could stand to be a little bit crisper. Some of the other Rap Snacks that I tried (in particular, the Hot Cheddar ones) combined great flavor with a high level of crispness for an amazing chip, but the moisture content of these is noticeably higher, making the overall experience just a bit below optimal.

From the package: “As original members of the highly acclaimed group New Edition, BBD was formed. Their unique blend of Hip-Hop beats, B-boy attitudes and R&B harmonies made BBD stand out from the rest. Their 1990 debut album, Poison, sold over 4 million albums ...”