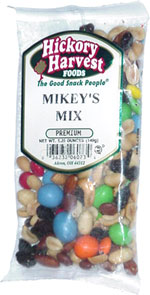 It's good, with a nice mix of sweet and salty. Nothing really special about it, since it's basically just an assortment of stuff packaged together in a bag, but it the bag did gradually empty during its stint in the chip bowl, and there were no complaints. I don't know who Mikey actually is, but presumably, he likes this particular combination of stuff.

From the package: “The Good Snack People®” ... “Packaged in the same equipment with other nut and dairy products”