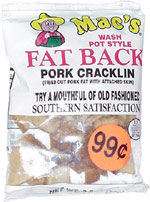 Taste test: We're not generally big fans of pork rinds here at Taquitos.net, but there are a few kinds that we've enjoyed.

These, on the other hand, were really quite bad. Most parts of them were really hard, almost hard enough to break your teeth. Other parts were softer, but too moist. The texture was so difficult to deal with that it's really hard to say much about the taste, but let's just say it tasted like pork fat. Addendum: Surprisingly, later in the day, a few patrons of the chip bowl (who described themselves as "people who like the taste of pork fat") said that these were great, complimenting both the taste and texture.

Smell test: Smells like pork fat, not too good.

From the package: “Fried out pork fat with attached skin” ... “Try a mouthful of old fashioned southern satisfaction”

This snack was discovered by Jeremy in Atlanta. Review published . 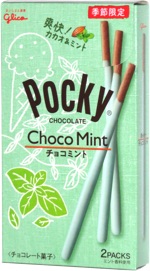