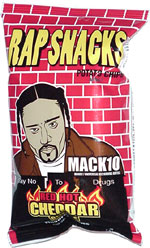 Taste test: These are some thoroughly awesome potato chips (one of more than 1600 varieties of potato chips that we've reviewed).

They're a clear standout among the other good Rap Snacks varieties that I've tried, and they're definitely among the top potato chips available today. They're extremely crisp and have a ton of really good cheddar flavor that really stands out, with a nice kick of heat mixed in. The amount of heat seemed to vary from chip to chip, as did the amount of deep red flavor powder. If you like cheese on your potato chips, get yourself some of these — you won't be disappointed.

Smell test: Sort of the smell of hot chips, but not actually a hot smell.

From the package: “Mac 10 began His climb up the charts back in 1998 with The Recipe and last years The Paper Route. As a new money of Cash Money Millionaires Club, Mack 10 releases his fifth solo album Bang or Ball. Check out his first single, 'Hate In You Eyes' produced by long time friend Dr. Dre. With a new label, Mach 10 is confident and is determined to give his fans what they want. Bang or Ball in-stores NOW!”