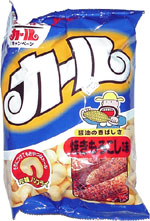 Taste test: The first reaction of just about everyone who tried these cheese puff-like snacks was one of surprise, because nobody expected them to taste anything like how they taste.

Descriptions of the taste ranged from just like Cap'n Crunch cereal to kind of like a tangy roasted corn on the cob. Some peope noticed the Cap'n Crunch-like taste particularly at first, when the initial sweetness overpowered the saltiness that comes later. These also had some detractors who didn't like them at all.

From the package: It's written mostly in Japanese.

This snack was discovered by Jeremy at Kotobukiya in the Porter Exchange, Cambridge, Massachusetts. Review published January 2003.