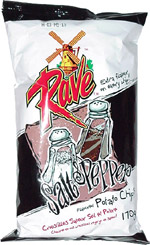 Taste test: These are good chips, with lots of black pepper flavor.

The flavor is intense so it feels like it has been cooked right into the chip, rather than just applied as a coating. The pepper is strong, but in a flavorful way — not so peppery as to bring tears to your eyes. These chips were popular around the chip bowl, but some people said they had too much pepper and not enough salt.

From the package: “Extra flavour on every chip! You know when you're eating a bag of chips and you get that one chip coated with so much flavour that your taste buds to a little happy dance? Well, every single Rave chip is just like that. Using the latest in taste technology combined with a little TLC, we cram extra flavor on every Rave chip — often twice as much as lesser chips — so you get more pleasure with every bite. Rave — for people who crave extra flavour on every chip!”

This snack was contributed to Taquitos.net by the manufacturer. Review published January 2003.