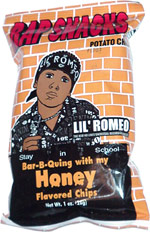 They taste good and don't have any aftertaste. The packaging is a bit unusual for potato chips, but basically, they're just good chips.

From the package: “Lil' Romeo: The New No Limit/Universal Records presents Lil' Romeo. This prodigy to Master P is not only a soldier in training, but also his son. Following in his father's footsteps there is No Limit to his Universal appeal. With the release of his sophomore album, Game Time, Lil' Romeo is the next in line to destroy the competition with his smash hit '2Way.' ”