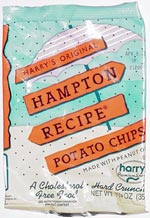 Taste test: These are pretty good chips, with a lot of potato flavor.

They're thick, with a good level of crunchiness. Harry doesn't skin his potatoes before he makes the chips, so they're a bit irregular in shape and consistency.

Smell test: The oily smell that you usually get from kettle chips.

From the package: “At the Eastern End of Long Island facing the Atlantic are over 40 miles of the prettiest bays and land called “The Hamptons.” Named after English towns by the early settlers, the Hamptons and its beaches, fishing, fine restaurants, local farms and picturesque villages, have become a place to go for fun and relaxation. At our home in East Hampton we enjoy entertaining good friends and family with an evening of food, wine, music, and conversation. I was never happy serving mass produced potato chips. Since I like to cook, I read about making potato chips and developed a recipe I could be proud to serve to those I feel deserved the best.”

This snack was discovered by Jeremy at Zathmary's, Needham, Massachusetts.