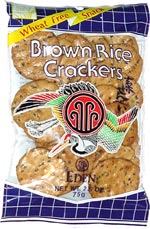 Taste test: These are large, round, thick crackers with black sesame seeds.

They have lots of crunch. The taste is a little unusual, with soy sauce and sesame among the recognizable flavors, but these were a popular choice around the chip bowl, even among people who wouldn't usually try an unusual snack such as this. One person who liked the taste a lot at first didn't like the aftertaste, but most people who tried one came back for more.

Smell test: Sort of a Japanese food-type smell, not too bad but not good.

From the package: “Wheat Free Snack” ... “Eden® Brown Rice Crackers were awarded a Gold Medal at the All Japan Confectionary Exposition ... an accomplishment acknowledging the sophisticated concept and craftsmanship of what they embody. Wholesome ingredients (brown rice, black sesame, job's tears and premium tamari soy sauce) are artfully combined in an 18-step process that takes over 48 hours. Steam cooking and multiple bakings produce deliciously light, crisp and satisfying crackers that are packed with flavor. Enjoy them with healthful abandon. As with all Eden brand foods, no preservatives, colorings or chemicals are used at any stage of their preparation.”