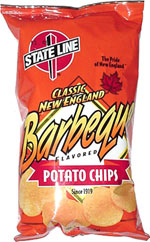 Taste test: These are good barbecue chips with lots of salt (and some sugar too) and a sweet and slightly tangy barbecue taste.

They're not the best barbecue chips in the world, but they're a good, solid barbecue chip. They leave a lot of powdery residue on your fingers, so bring a napkin.

Smell test: Smells like a bag of potatoes, sort of.

From the package: “The Pride of New England™” ... “We are Traditionalists. Back in 1919, The Carville family created their first potato chips in their Enfield, Connecticut kitchen on the Massachusetts-Connecticut state line. State Line Potato Chips soon became the favorite of New Englanders. 1919 was a long time ago and time has changed many things. Big companies now market flashy mass-produced potato chips and snacks as fast as they can. However, we are still producing Stateline Potato chips, and we will not forget our traditions. The Enfield kitchen may be long gone, but our promise remains the same ... Not flashy and high-tech — JUST GOOD.”