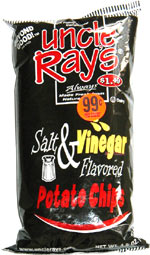 Taste test: These are decent salt & vinegar potato chips, slightly greasier than Wachusett chips but with the same "flat" cut (the chips are flatter than curved).

A good balance between salt and vinegar, there's not so much vinegar that you wince when you eat them..

From the package: “The life and times of Uncle Ray - Chapter 23. Who is the bully? You decide. As an adult, fear is one of the many feelings we have and for the most part we learn to deal with it. But as a 10-year-old boy, I am surprised at times my hair didn't turn gray. Our family lived in the Fisher Housing Projects in Detroit, Michigan. I walked to Boynton School each day and had many experiences along the way. One of those times dealt with a boy named Bobby who would beat me up just for the fun of it. One day on my way to school, Bobby had two of his buddies with him and he yelled, 'Hey four eyes! (My glasses were as thick as Coke bottles). Got any lunch money for me?' He said lunch money or not, he and his friends were going to beat me up. I knew I couldn't outrun them, so the next best thing was to throw a rock and hope to scare them off. I found a round rock the size of a golf ball. I threw it as hard as I could and as the rock landed on top of Bobby's head, his blonde hair turned red. I was scared to death. I thought I had killed him. As I ran to school, a different kind of fear boiled up inside of me. I had been at my desk about an hour when my teacher came up and told me the principal wanted to see me in his office. NOW! What a tongue-lashing I got. Bobby was at the hospital getting stitches and I was told I was nothing but a bully and if the principal had his way I would be put in jail. This was another kind of fear that I had to deal with. Jail at 10 years old, how would I survive. A week or so later I met Bobby in the hallway. He yelled, 'Hey Ray, want to shoot some marbles after school?' To my surprise, he wanted to be my friend. I have many memories of my childhood and most are good. Soda pop tasted better, so did candy as well as most foods. As a small child, emotions and feelings run very deep. I realize as an adult it is important to be sensitive to children, for they have many pressures that we as adults have outgrown or have learned to deal with. Should you read this Bobby, I want to say that I am sorry. The choice I made injured you and got me in trouble to boot.”