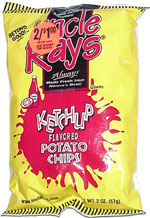 The chips were light colored with a medium amount of visible red powder on them. They had a mild (rather than tangy) but still very tasty ketchup flavor, on a really good, thin, crisp chip. The mix of ketchup and potato flavor was quite delicious.

From the package: “The Life and Times of Uncle Ray — Chapter 4: Can't tell a book by its cover (or a chair). As a 10-year-old boy in the Fisher Housing Projects we didn't have much extra money for the movie show and such things. From time to time I would take the cushions off the chair and couch and look for lost change. One day a neighbor put an overstuffed chair out in front for garbage pickup ... ”