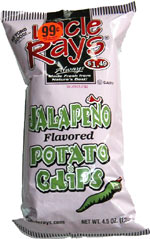 Taste test: These are regular chips without much jalepeno kick on them at all.

I had to lick several chips before deciding whether there was a mistake and I got something else. If you're looking for a chip with kick, skip these. Even the hot burn aftertaste that sometimes comes with jalapeno chips never really arrived. More like a smolder instead of a burn. We didn't even have to put our "hot!" warning signs up when we used these for "Chip of the Day."

Smell test: A slight jalapeno smell. Other Jalepeno chips we've smelled have a much stronger aroma than this one did.

From the package: “The life and times of Uncle Ray, Chapter 8 - A memorable prank - My brother Bob was three years older than I. We spent summers in rural Tennessee with my grandparents. We would enjoy our days swimming in the cold creek that flowed from the mountains near their farm. One day, my brother and our two cousins went skinny dipping. Because I was just a pup, eleven years old, they told me to get lost. As it happened, we were having a family reunion that day, with eighty people in and around my grandparents' 19th century log house. Bob and our cousins, aged 14 and 15, were upstream a quarter-mile or so. When they got in the water, I gathered up all their clothes and took off running. Out they came, wet and mad, throwing rocks and hollering for me to drop their things. I didn't, and ran like a bandid toward the house. When the ladies of the family saw the three naked boys, they started hollering even louder than the boys. 'What do you think you're doing? You should be ashamed!' After some time and much negotiating (from a distance), they promised not to kill, maim, hurt or do other bodily harm to me if I would just put down their clothes and shoes. (Their feet were hurting badly, I guess). They did not bother me for the rest of the day.”