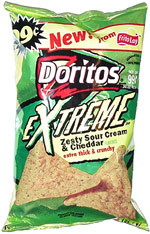 Taste test: I was quite excited when I heard that there was a whole new kind of Doritos, and that they were supposed to be more "extreme" than ever.

According to the bag, not only were they changing the taste, but also the thickness and crunchiness of the chip. Quite a commendable goal. The verdict: These are good chips, but I was underwhelmed by the "extremeness" of them. They taste like sort of a cross between the Nacho Cheesier flavor and the Cooler Ranch flavor. So it’s not even really a new taste. They don’t particularly taste like sour cream and cheddar. They are thicker than regular Doritos (but not that much thicker), and the chips seem to be a bit larger, with more rounded corners.

Smell test: About the same as regular Doritos.

From the package: “Yes, you are bold, but are you daring enough to try new Doritos® Extreme™ brand tortilla chips? These outrageous chips are extra thick, and extra crunchy, to give you a bigger, bolder Doritos® brand taste.

This snack was discovered by Jeremy at Xpress Food Mart, Bainbridge Street, Philadelphia.