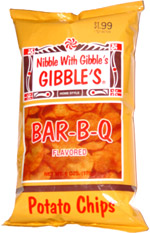 Taste test: These have very bacon-like taste, thanks largely to the fact that they're cooked in lard.

The barbecue taste is good, and lot of lot people liked these, but they have a definite greasy quality to them, like most lard-based potato chips do. The overall consistency of the lard-based chips is much different than your typical potato chip.

Smell test: OK, kind of barbecuey, but you can tell from the smell that they're made from lard.

From the package: “Did you know? When George Crum, a Native American chef, served the first potato chips to Commodore Cornelius Vanderbilt in 1853, he used the animal fats available in his day to produce his new product. Today, with all of the various oils on the market, Gibble's still uses lard — an animal fat — to make their potato chips. Why? Because we believe that simple and natural is best.”

This snack was discovered by Keith and Melissa at Weis Market in Carlisle, Pennsylvania. Review published .