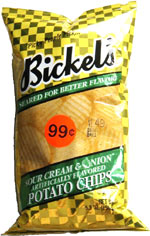 There's a good amount of sour cream and onion flavoring also. The chips were a bit more oniony than sour creamy.

From the package: “Seared for Better Flavor” ... “Bickel's Potato Chips taste better than any other chip because we sear in real potato flavor. Since Mr. Luther Bickel started the company in 1954 we've been using our original formula, in which we wash our potatoes before slicing them, instead of after, like most companies. We believe that washing the potatoes after slicing washes away vitamins, nutrients and flavor. Next we sear the potato slices in 100% pure vegetable oil. The result is more natural potato taste with less sodium than most other brands. Try our chips, pretzels and other fine snack products, and you'll discover why 'Picky People Pick ... Bickel's!' Brother Bickel is here to remind us of our commitment to time-honored techniques and recipes. After all, it was a sleeping monk who invented pretzels b y leaving twisted soft bread in the oven too long.”

This snack was discovered by Keith and Melissa at Gayle's Market, outside Harrisonburg, Virginia. Review published September 2002.