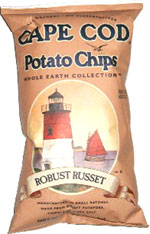 Taste test: I've never been a big fan of russet-style chips, they always look burned to me and they taste kind of odd.

If you're a fan of those types of chips, though, these will be pretty good to you. I always think that they taste odd, though. Slightly greasy, but that's normal for a Cape Cod chip.

From the package: There's a long, long, story on the back of this bag. We'll print a portion here: “Inside each bag is our favorite version of one of Mother Nature's finest, most nutritious and versatile foods: the humble potato. Since its cultivation began in Peru 4,500 years ago, tales of tubers have become part of international folklore. The nutrient-dense wonders have adorned tables everywhere, and have been credited with everything from fueling the libido to curing sundry injuries to saving the Western world.” There's about 5 more paragraphs like this, and my fingers hurt from typing.

This snack was contributed to Taquitos.net by the manufacturer. Review published July 2002.