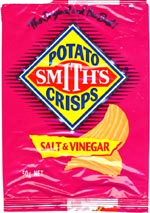 Taste test: Although introduced as direct competition to the Samboy Salt and Vinegar, these chips stand alone against enduring favorites.

Smith's have taken their original potato chip and enhanced it with a mild salt and vinegar flavor. The taste is not so overpowering as to wrinkle your lips but enough so you don't feel cheated. Currently the best salt and vinegar chips available in Australia.

Smell test: Gentle salt and vinegar aroma that doesn't cause your eyes to water.

From the package: “The Original and the Best” ... “What makes Smith's Salt and Vinegar potato chips Australia's favourite? Is it our mouthwatering salt and vinegar flavour? Maybe it's Smith's incredibly fresh crinkle cut crunch? Or is it the delicious taste of 100% grown potatoes? Smith's — they're toooo goood”

This snack was discovered by Mairéad Doolan at Safeway in Australia. Review published .