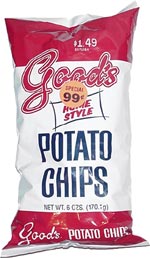 Taste test: Like several Pennsylvania-based chip companies, Good's chips are made with lard, and it gives them a much different texture and taste than your typical vegetable oil-based chips.

Some people really go for this taste, but most of our tasters found them to taste greasy and not be all that appetizing. It's not an awful taste, but we tended to eat one chip and not go back for a second, which is much different from how we typically eat chips. The grease, however, is just in the taste, as they don't leave any residue on your fingers. There's no need for a napkin with these chips. Also, they seem to be fairly low in salt.

Smell test: A bit different from most potato chips. Kind of potatoey, but also kind of oily.

From the package: “The Good's Potato Chip family, now in their fourth generation, started making Potato Chips on their kitchen stove in 1928. By 1939 a home made cooking kettle was set up in their garage to meet the growing demands of the popular snack chip. In 1952 the Good's moved into their present facility still using their time-tested hand kettle operation. A continuous cooker was installed in 1966 to maintain the growing desire for their delicious potato chip. Their Chip's popularity has continuously grown over the 60 year span of quality Pennsylvania production. The Good's Family Pride still carries on, to give you the very best quality, with an old fashioned taste, which everyone loves!”

This snack was discovered by Eric Ricker. Review published .