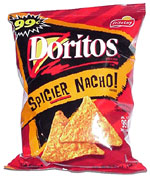 When we first bite in, we didn't notice the spice at all — the taste was all cheese. After several more bites and a short delay, a mild spice slowly kicked in. But it never really got all that far beyond the mild spice stage. They tasted quite good, kind of like Nacho Cheesier Doritos but with some kick.

Smell test: There's a nice spicy kick to the cheese smell of these.

From the package: “This is nacho cheese flavor with a bolder attitude! Even more heat, a ton of spice, and you've got radically louder spicier nacho flavored Doritos!”

This snack was discovered by Jeremy at Jiffy Mart, Ludlow, Vermont.