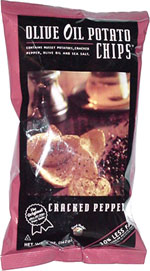 Taste test: These chips were extremely popular around the chip bowl.

The chips are very thick (and yet also light and airy at the same time), with a whole lot of crunch and a mild pepper taste. It's quite a difference from your typical potato chip, and people liked them a lot and kept coming back for seconds and thirds. Yum!

From the package: “From Greece, to Italy, to Spain, to Provence, the Mediterranean is bursting with taste. At the center of its culinary culture, olive oil, catharsis of flavor, spells taste. While the golden elixir is gaining momentum from California to New York and throughout cosmopolitan cities in the United States, we concocted our dream chips based on world class ingredients and a bit of Riviera cuisine.”

This snack was discovered by Mary at Linens'n Things. Review published .