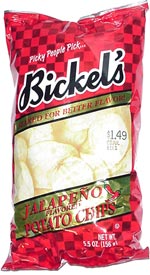 Taste test: These are fairly thin, extremely flavorful jalapeño chips with a medium level of heat.

They've got as much jalapeño flavor as any chip I've tried — with quite a bit less heat than some, but still a reasonable amount for those who are in it for the heat. The claims that Bickel's makes about searing the flavor into the chip ring true when you taste them — they've just got a ton of flavor. These were very popular around the chip bowl.

From the package: “Picky People Pick Bickel's” ... “Seared for Better Flavor!” ... “Bickel's Potato Chips taste better than any other chip because we sear in real potato flavor. Since Mr. Luther Bickel started the company in 1954 we've been using our original formula, in which we wash our potatoes before slicing them, instead of after, like most companies. We believe that washing the potatoes after slicing washes away vitamins, nutrients, and flavor. Next we sear the potato chips in 100% pure vegetable oil. The result is more natural potato taste with less sodium than most other brands.”

This snack was discovered by Eric Ricker. Review published .