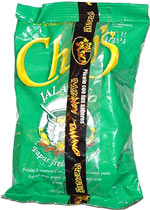 Taste test: These jalapeño chips are not the hottest in the world, but they're quite good and quite tasty.

They're thick and extremely crisp, with a great crunch. When you first bite in, you get just the jalapeño taste but none of the jalapeño heat. The heat starts to kick in a few seconds later, and it grows to a medium level. After eating a few chips, I noticed a special bonus: there's a packet of salsa dippin' sauce included in the bag. (If I knew Spanish, I probably would have known this sooner by reading the bag.) I never even thought of dipping a jalapeño chip in hot sauce, but I can't argue with a great idea like that.

This snack was discovered by Marlo in Mexico. Review published .