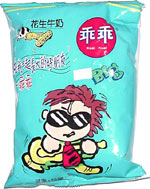 They're good. They leave lots powdery residue on your fingers, and they also tend to stick to your teeth.

This snack was discovered by Jeremy in Montreal. Review published .