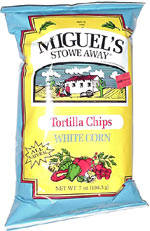 Taste test: These are good tortilla chips, with lots of corn flavor and just a bit of salt on them.

They're shaped slightly differently from your typical tortilla chips, as these are shaped like 1/4 of a circle, rather than the typical triangular configuration. They're thin, crisp, and large enough to hold quite a good portion of salsa, if you're in the mood for some dipping.

From the package: “So, you ask, why would the best authentic tortilla chip recipe this side of the Pecos River come from a ski lodge in New England? The answer is in the story which began when Michael (alias Miguel, Louie or Tim) headed west to find soft snow and hot food. To New Englanders, Wyoming is as distant as Tijuana, and tacos will never look like chowder and clams, but there in the mountains Miguel found the master chefs. He listened and he learned their secrets and years later he returned to Vermont with three dollars (in his pocket) and a vision. The three dollars speaks for itself — the vision (we all had one, we hope) became the Stowe Away Lodge, Vermont's authentic Mexican Restaurant. Our now famous White Corn Tortilla Chips and Salsa Cruda have been satisfying the appetites of the world's best (and not so best) skiers for over seventeen years.”

This snack was discovered by Jeremy at Building 19. Review published June 2002.