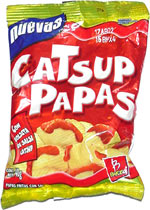 Taste test: When I saw the picture on the bag, I thought that these were going to be rippled chips with lumps of ketchup on them. It turned out to be not quite that way — actually, they're rippled chips without ketchup on them at all, but the bag comes with two ketchup packets, so that you can dip them yourself. If I knew Spanish, I probably would have figured this out before opening the bag, because it says, "Con bolista de salsa ketchup" (which I now think means something like "with packets of ketchup").

Anyway, I think this is a great concept in ketchup chips — real ketchup, rather than ketchup powder. I've been dipping my regular chips in ketchup for years, and finally a chip company has caught on. You get to put pretty much as much ketchup as you want on each chip, within the limits of the amount of ketchup provided. There were quite a few chips in this small bag, but only two ketchup packets, so if you're a big ketchup lover, you might run out of ketchup before you finish the chips.

Smell test: Nice smell, can't quite figure out what it smells like. On second whiff, it did smell like ketchup.

This snack was discovered by Marlo in Mexico. Review published May 2002.