As Krispy Kreme grows omnipresent, we're on a quest to visit at least one Krispy Kreme store in each state lucky enough to have one. We've been to locations in the states pictured below. 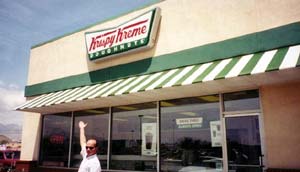 Other dining options in this town include McDonald's (left) and free-salad-refill place The Olive Garden. 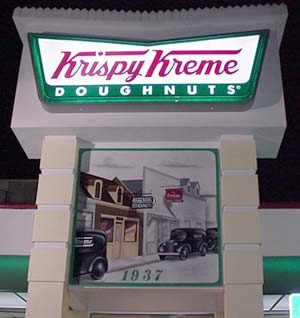 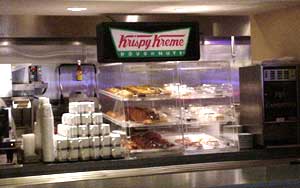 Visited during a break at the Snaxpo convention.

This picture was taken on May 14, 2003 — just a day after the Ocean State's first Krispy Kreme opened for business. 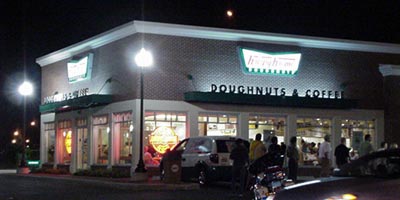 The new store in Wellington Circle, Medford, was the center of Boston's attention on its opening night, June 24, 2003.

I didn't have time to go inside (plane to catch) but it looked delicious.

At the Excalibur in Las Vegas 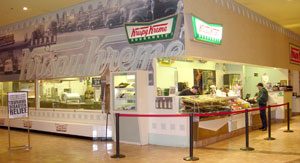 Located near the food court at the Excalibur, this location offers an excellent view of the donut-making process. If you're not in the mood for a donut (blasphemy!), you can wander right next door to the Cold Stone Creamery.

At the Venetian in Las Vegas 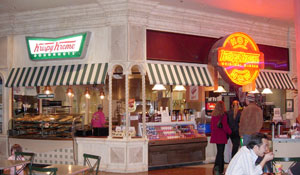 One of the newest Krispy Kreme locations in Vegas, this one is nestled in the back of the food court area of the Venetian Hotel. We didn't try any donuts here, as we were running late for a meeting. 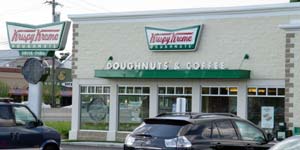 Dedham is known internationally as a leading center for education, industry and the arts. But this town never really got much respect in the Boston area until the day that Krispy Kreme arrived at 780 Providence Parkway. This store's construction truly put Dedham on the map.