Snacking Tour of the American Southwest

Last summer, I traveled from Boston to the Southwest. Highlights of the trip included hiking in Zion Canyon, the Grand Canyon and Red Rock Canyon, gambling in Las Vegas and experiencing Star Trek: The Experience four times. Oh yeah, I also bought some chips.

Figuring that United won't be serving much in the way of food on the flight to Chicago, I make myself a very early lunch — three taquitos with Frontera Spring Break Salsa — before leaving for Logan Airport. 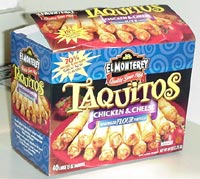 This box of El Monterey taquitos provides some energy for a long trip.

United serves a small snack, containing one "Eli's Chicago's Finest Cheesecake Just the Crust Chocolate Chip Cookie" along with a beverage. It's OK, but not much to eat for a 2-hour flight.

O'Hare's United terminal has a good food selection. The 10% tax on all food is kind of steep, though. After checking out all of the numerous food options, I end up getting quite a variety of stuff:

Friday late afternoon, on the ground in Chicago, waiting for plane to take off for Las Vegas

After boarding the plane but before takeoff, I sit taking notes on my Handspring Visor on what I've eaten so far. The woman seated next to me starts to stare.

"Would you mind telling me what you're doing?" she asks. I look up. "Is that a game or something?"

"You're just too far ahead of me with the technology," she says.

The first announcement after takeoff from Chicago is "Ladies and gentlemen, on this flight we will have a snack service accompanied by a beverage of your choice." Woo-hoo!

Done taking notes on what I've eaten so far, I open up United's in-flight magazine "Hemisphere" and find an article about the food choices at Newark Airport. According to the article, highlights include the Garden Street Diner, a "sprawling" food court, and Dick Clark's American Grandstand Grille, "where burgers, nachos, and sandwiches are all served with a classic rock accompaniment."

The in-flight movie "Monsters, Inc." is starting, so I reach into the seat pocket to get the headphones. Along with the headphones, I find the discarded wrapper from a bag of King Nut Co.'s Summer Harvest Party Mix.

Eight minutes into "Monsters, Inc." I get confused because I can't understand what any of the monsters are saying, and then I realize that I've been listening to the Spanish audio track (channel 10). I change the channel.

A flight attendant hands me a United snack box. It says "Official airline sponsor of the Taste of Chicago." Contents are:

Flight attendant offers me a second beverage. I decline.

The flight attendant takes away my finished snack box.

After landing in Las Vegas, the first thing I notice is the slot machines, which are spaced about an inch apart throughout the airport. After picking up my rental car, I hit the road, passing the fabulous Strip on the way to Interstate 15, which I will follow most of the way as I head toward Zion National Park.

The thermometer in my rental Mercury Cougar says it's 102 degree outside.

Thirsty, I pull off Interstate 15 at Exit 4 to get a beverage and check out the chips at the Mobil convenience store. Good news: There are a few chip varieties that I haven't seen before. Better news: They have a special promotion: a 32-oz. fountain drink and a bag of chips for $1.69. That seems like a good deal, and a good excuse to start early on my chip buying. Bad news: They're all out of caps for the 32-oz. cups. I get a 44-oz. drink instead. And since, through no fault of my own, the special offer to get some discounted chips doesn't apply if I want to have any hope of not spilling Hawaiian Punch all over the rental car, I choose not to buy any chips.

Realizing I've barely eaten since Chicago, I pull off the road at the Flying J Travel Plaza, which is a combination convenience store/Burger King. I get a Dean's Lowfat Chocolate Milk Chug at the store, and I order a Big Fish at the BK. The sandwich is surprisingly good, but it takes them forever to get it to me, as the counter guy seems preoccupied with serving drive-through customers. But the conversations I overhear fascinate me. Personally, I've never, ever heard of a Burger King serving tacos (and tacos are nowhere to be seen on the menu) but every single walk-up customer other than me and every car at the drive-through asks the counter guy, "Do you have tacos?" which leaves me feeling like I've escaped to some sort of parallel universe where Burger King sells tacos and Taco Bell sells burgers.

Here's the chocolate milk from the Flying J (pictured a few days later against the Grand Canyon backdrop).

Taking advantage of the time zone change, I wake up before sunrise and go for a run through a deserted Zion Canyon, getting my first glimpse of the amazing formations of this leg of the Grand Staircase. Before I even reach the Zion scenic road, I encounter a deer meandering around the front of the lodge. I spot another deer during my run.

After the run, I purchase some PowerBars and Gatorade at the Zion Lodge's gift shop.

After a couple of easy morning hikes in Zion Canyon, I get lunch at the Zion Lodge's Castle Dome Café: a bowl of chili ($2.50), a small fries (95 cents) and a 32-oz. Hawaiian Punch ($1.60). Add in 35 cents Utah state tax, and the total comes to $5.40. This gives me some energy for my more-difficult afternoon hike of Zion offshoot Hidden Canyon.

Outside Moqui Cave on Route 89 in southern Utah

Driving south on a road through the middle of nowhere, enroute from Zion to the North Rim of the Grand Canyon, I see a makeshift road sign and can't believe my eyes. 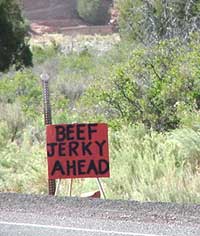 I am not making this up.

Get Your Beef Jerky Here! 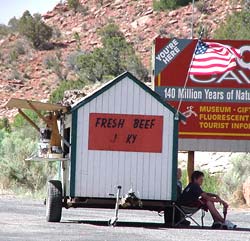 This is the beef jerky stand advertised on the sign. Two kids are actually selling beef jerky.

After many miles of pretty much nothing to see except beautiful scenery, I stop for gas in Kabab, Utah, which is where Route 89 and Route 89A intersect. I buy some snacks and chocolate milk at the little store next to the gas station.

North Rim of the Grand Canyon

Starting at 5 a.m. Sunday morning, I hike down the Grand Canyon's North Kaibab Trail to Cottonwood Campground, starting at an elevation of 8000 feet and finishing at about 4000. Going down is not very hard. I brought plenty of snacks, water and Gatorade and had packed clothing for all conditions. Going back up ends up being the most exhausting hike I've ever done. The last couple of thousand feet of climbing are particularly tough. 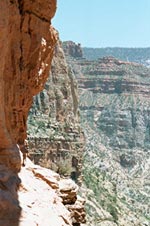 By the time I get back to the trailhead, I am completely exhausted. I drive back to my cabin at the Grand Canyon Lodge, eat and hit the bed, snoozing for about an hour. Still feeling weak, I venture over to the lodge's snack bar and buy a veggie burger, a Sobe drink and a bag of Ruffles Sour Cream & Cheddar. I go to lodge's nearby balcony, which has an amazing view of the Grand Canyon, to eat. A guy walks up to me, points to the bag of chips, and asks "Where did you get that?" (He does not seem the least bit interested in finding out where he can get his own veggie burger.)

That meal helps a little, but I am still quite exhausted. So I drive down the road to the Grand Canyon General Store (which has a very, very impressive assortment of snacks and beverages for sale), and I purchase a Nesquik. Wow, seriously, that drink makes all of the difference in the world. Energy returns, and I feel almost completely revived.

On the road back to Vegas, I stop in Fredonia to get gas. While I'm there, I check out two convenience stores and buy two bags of chips.

The obscure Pipe Spring National Monument isn't on my original itinerary, but I already shelled out $50 for a National Parks Pass back at Zion, so I want to get my money's worth and stop at every national park I can. Pipe Spring isn't all that exciting, but it is right off the road, so taking a tour of Winsor Castle doesn't cost me too much time.

Right next door to Pipe Spring is a Mobil gas station/convenience store owned by the Kaibab Paiute Indian tribe. I buy a Country Time lemonade and a small can of Pizza-licious Pringles. Just after I pull back onto the road, headed west toward Vegas, I pass a Frito-Lay truck driving the other way. I don't know whether the driver notices that I'm eating rival snack Pringles.

Finally back in Vegas, I meet up with fellow chip hunters Keith and Melissa at the rental car return place. First stop is the 7-Eleven, where we check out the chips and purchase some hot-off-the-rollers Go-Go Taquitos.

A Celebration of Taquitos 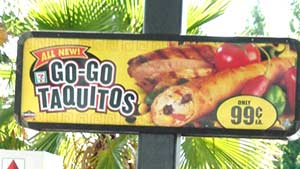 7-Eleven celebrates the arrival of a new treat.

We arrive at the Las Vegas Hilton, and after settling in, we play a few nickel slots and check out some of the lobby stores. I am appalled to see that bags of chips have been marked up from the prices that Frito-Lay has printed on the bags — a phenomenon that I've never seen before, but apparently is typical for Vegas.

Next is dinner at Benihana. What more can I say? Well, if you really do want to know more, see our Questions About Benihana. 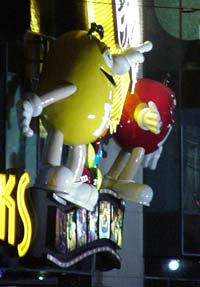 While checking out the various casinos on the Strip, I visit M&M's World, a huge store selling various M&M's and M&M's-related products. I purchase two bags of a new flavor of M&M's that I've never heard of: caramel M&M's. They cost 70 cents apiece, plus a nickel tax. I eat them while riding the monorail from MGM Grand to Treasure Island. They taste quite good. To this day, I've never seem them sold anywhere else.

With an early morning start, we drive off toward Red Rock Canyon. On the way, we stop to look for chips.

A hike at Red Rock Canyon, followed by a scenic drive around the canyon, is a nice, quiet break from la vida loca of nearby Vegas.

On the way back from Red Rock, we stop at another supermarket to check out the chips. Jackpot.

I purchase a cardboard box at the Las Vegas Hilton's Business Center for $6.50 plus 47 cents tax to bring all of the chips back home in.

Changing planes in Denver is the perfect opportunity to buy more snacks. In addition to three bags of overpriced Boulder Potato Chips, I even buy a single-serve Nesquik at Wolfgang Puck's (a pricey $1.89).