When Krispy Kreme announced that it was expanding into New England, it was big news. This is home turf for Dunkin' Donuts, and lots of people in the Boston area wouldn't know Krispy Kreme Doughnuts from crispy cream (or creme) donuts, but the KK mystique has at least begun to spread to these parts.

The first Massachusetts location opened June 24, 2003, at Wellington Circle in Medford (pronounced "Meffa" around here, and already home to eleven Dunkin' Donuts stores). Below is a chronicle of my attempt to attend the opening ceremony for the temporary mobile Krispy Kreme that came to Medford for four days, along with an ongoing look at the building of the fabulous permanent store. 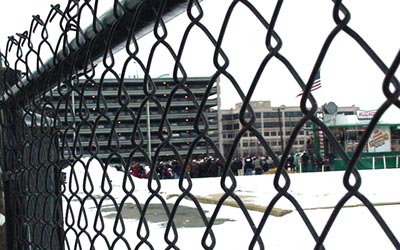 Doughnuts were scheduled to go on sale at 11 a.m., but a ceremony was planned for 10. When I arrived, there was already a large crowd gathered. Medford police were there stopping cars before they could enter the parking area for the temporary Krispy Kreme. An officer asked me "Where are you going?"

"To the Krispy Kreme event," I said, pointing.

"For what purpose?" the officer asked.

That threw me for a loop, as I hadn't expected a question like that at all.

My lame answer — "Ummm ... to get doughnuts?" — apparently was the wrong one, as the policeman told me that it was closed to the public until 11 a.m. and I had to leave. 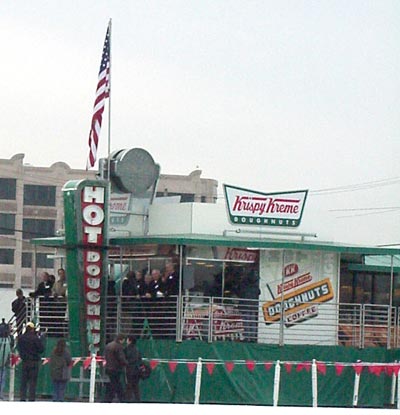 Not wanting to go away empty-handed, I turned around and parked across the street, where a former Bickford's was being torn down to make way for the new Krispy Kreme, so that I could at least have these pictures to prove I was nearly a witness to this historic event. Squeezing my camera into an opening in the fence, I got this unobstructed view of the festivities.

Here's a view of the entire mobile store, complete with whichever dignitaries were allowed in.

Meanwhile, across the street ... 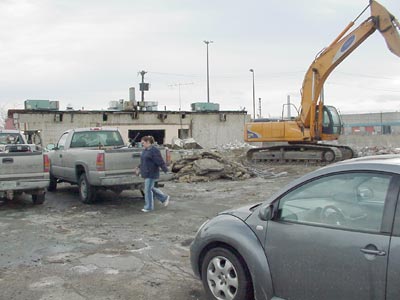 Even as the celebration went on at the temporary Krispy Kreme across the street, workers were busily destroying the old Bickford's to get ready to build the permanent Krispy Kreme there. 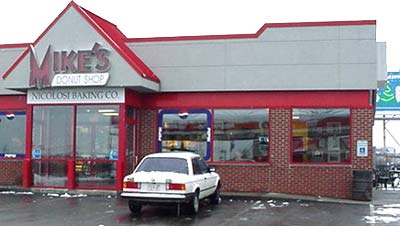 Having walked away from Krispy Kreme doughnutless, I stopped on the way home at Mike's Donuts in Everett and got a Boston Creme. It was good.

I returned several weeks later to check on the progress of Krispy Kreme's first Massachusetts store. Best I could tell, there hadn't been any.

Not Much to See 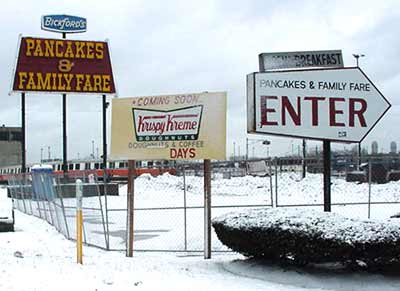 The Bickford's building was completely gone, but some of the signs remained. The mobile Krispy Kreme across the street had vanished, and the only evidence that a real Krispy Kreme is on the way is the sign in the middle here. It appears that they haven't even started digging a foundation for the new store. 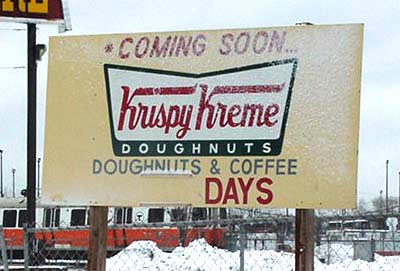 Evidently, people aren't noticing this sign. Right before I took these pictures, an SUV pulled up, and the driver rolled down his window and asked me what happened to the mobile Krispy Kreme. After I told him it was only there for four days, he said that he had thought it was going to stay there until the real store opened. He was amazed at how the mobile store had just vanished without a trace (sort of like he had only imagined it being there), and he said it seemed "like the Twilight Zone."

After months of no progress at all, it appears that we may finally be moving ever so slowly toward doughnut heaven. Not much to see, but they're pouring a foundation. 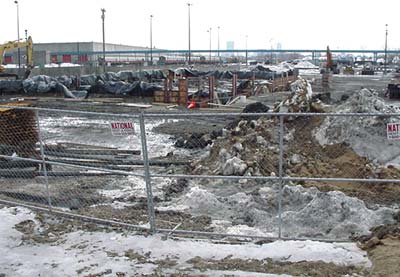 This is the view looking down from the sidewalk on Route 16 (Mystic Valley Parkway). You can see the skyline of Boston's Back Bay in the background. 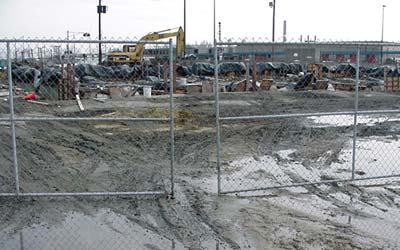 This is the view from the side where the entrance will eventually be. No construction happening this Saturday, but it definitely looks like they've poured a foundation.

Finally some above-ground pieces of an actual building — walls!

Here you can see the old Bickford's sign, along with a cinderblock wall that's in progress. 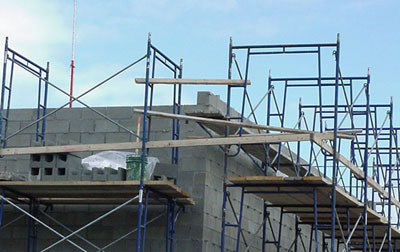 Here's a close-up view of some of the masonry action on one of the walls.

Here's a wider view of the whole Krispy Kreme store as it currently exists. Aside from the "Coming Soon ..." sign shown in the earlier pictures (which still doesn't say how many days), there's nothing on the site that identifies this building as a Krispy Kreme.

The walls have gotten higher ...

... but no commitment yet regarding an opening date.

Another week, another wall ... 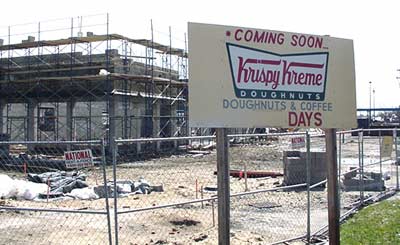 ... but still no estimate on the number of days until opening.

No huge progress this time, but it looks like the walls have gotten higher.

After a few weeks without visiting Medford, I returned to find that the cinderblocks had been covered with red bricks, giving at least the appearance of great progress toward actual doughnuts.

Things were really starting to take shape. They finally started posting a real daily countdown, the chain link fence was gone, some preliminary landscaping had taken place. And most notably, there were construction workers present on a Saturday, so you can tell that they were getting serious about building a very serious doughnut shop.

The building was pretty much done, but there was lot of construction activity going on in and around it.

For those of you seeking a career in the doughnutorial sciences, Krispy Kreme was actively seeking your services. 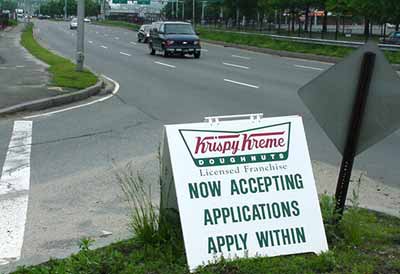 This is the view looking west on Route 16 toward the Route 28 intersection, where another recruitment sign was posted.

On this rainy Sunday, just two days short of Opening Day, the store looked complete. The huge road sign had magically appeared, landscaping was done, and inside, it looked like an actual functional doughnut shop, except that there was nobody inside. 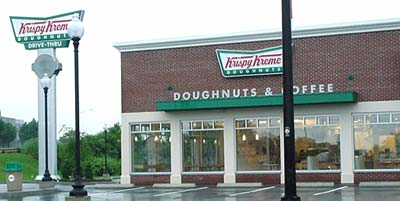 It's hard to notice, but the free-standing sign includes a "Hot Doughnuts Now" neon sign, which unforunately wasn't turned on. Now that the Bickford's sign is gone, I assume you won't be able to order off the Bickford's menu. 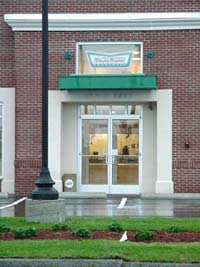 Here's the front entrance, which surely won't look this deserted for long, as people queue up here to get their doughnuts. The store hours, posted on the door, are astounding for this Puritan part of the world — 5 a.m. to 2 a.m. weekdays, 5 a.m. to 3 a.m. weekends, and with a drive-thru that's open 24x7.